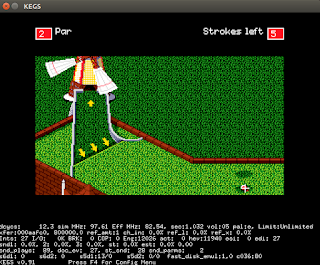 So yesterday was Father's Day, and I decided that I wanted to show my kids my old Apple IIgs games that I loved.  We pulled up Zany Golf but had a problem: my kids kept losing all their strokes (turns) immediately so they weren't having any fun!  I searched online for a cheat so that I could show them the whole game but found nothing.

Why using an emulator is so much nicer: Using an emulator to reverse engineer these old pieces of software is so much more convenient than using a real Apple IIgs.  For one thing, it's a lot faster to start the game.  And for another things, its built-in debugger is much nicer for stepping through code than trying to hack the boot process of the game enough to do it with the built-in monitor (yuck!).

First thing I did was searched for this string on disk.  I found it inside the file named "CODE" inside a Zany Golf subdirectory.  At this point, I realized that this wasn't very helpful because I did not know how CODE got loaded into memory.  I decided that I needed to run Zany Golf in KEGS and search the memory for this string to find where it got loaded.

Unfortunately, I discovered that KEGS (apparently!) does not have a memory search function.  After a few false starts down other paths, I decided to whip up a quick n' dirty memory search function that searches the entire emulated memory space for the string I was looking for.  On a modern PC, this brute force approach still completes very quickly so it's no big deal.

I tried to understand how KEGS actually managed the emulated memory and I got confused quickly.  As grateful as I am to have an emulator for the Apple IIgs, KEGS unfortunately is somewhat convoluted for me (although maybe others don't have as much trouble) with heavy use of global variables that look like local variables, and lots of macros.  So I ditched the idea of understanding how KEGS handles its own memory and instead just wrote a new search method that calls the get_memory_c method that KEGS provides and which the debugger uses to do memory dumps.  My custom method was tailored specifically to the search string and once I found the string, I wouldn't need it again.

Using this approach, I found the string at $01/736D.  On disk, it is at offset $726B inside the CODE file which is kinda weird.  This suggests that CODE is loaded at $01/0102.  I used IDA Pro to disassemble CODE at this starting address to give me some more visibility.  This succeeded with partial success although a lot of the 8/16 bit addressing modes were fouled up.

I stepped through gdb at this point and after the GET_MEMORY8 macro was called, I typed "print ptr" to see the native memory location.

It came back as 0x7ffff647746d (ie a random number) and this value isn't that important because it may change each time the emulator is run (at least that is my impression).  What is important is that I set a memory breakpoint on it and then get the string about my last stroke to appear by playing through the game.

So I typed "rwatch 0x7ffff647746d" and then "continue" to return control to KEGS.  I then typed "g" to exit KEGs debugger and resume the game.  I played the game until I had one stroke left and sure enough, my memory breakpoint got hit! Woohoo!

'kpc' is the variable name inside KEGS that holds the Program Counter (PC) so I typed "print kpc".

I set a breakpoint on $01/3e20 and restarted the game.  But the breakpoint was getting hit too often so I concluded that it was part of the "Draw text" routines.  So I disabled the breakpoint, started a new game, and played until right before the message was to appear.  Then I entered KEGS debugger again and set the breakpoint.

I putted the ball and sure enough the breakpoint got hit again.  I set a new breakpoint on the RTS instruction which came shortly thereafter (because KEGS does not have a way to 'step out' of a function, so this is a poor man's equivalent).

This took me to $01/440C which made the JSR, but this is the beginning of a subroutine (according to IDA Pro) so I concluded that nothing interesting was here.  I set breakpoint on 4428 (right before RTS) to step out of this method.

This took me to $01/6da2 which modifies $28 and $29 so this may be the subroutine that sets the message about it being the last stroke, as I noticed some references to these constants earlier.

I set a breakpoint at $01/6deb, right before the next RTS to step out of this method.

I did not see anything that decrements the memory location jumping out at me so I went back to gdb's data breakpoint on this memory location ($01/424E) using the same technique that I described earlier.

Without even needing to start the game over again, I putted the ball again (which concluded with my game being over) and the memory breakpoint was hit... ($01/705E)

Here's the code that decrements the stroke count! :)

Looks like a simple NOP at $705E should do the trick to give unlimited strokes.

You can now show your kids this game without making them get frustrated!! :) :) :)

I've tested through level 2 and have no idea if something REALLY BAD will happen if the stroke count gets too high later, so take that as a caveat.  Possible changes to this mod are to hard-code the stroke count to something like 5 instead of NOP'ing out the decrement.

I wanted to try this trick again on a different disk but had forgotten how I hacked KEGS to do a memory search.  Here is the function I wrote for reference:

Inside dis.c, inside the function called do_debug_intfc(), I added this to the switch statement: