I've been rewriting Daphne's Z80 emulator (from scratch) and testing it on Dragon's Lair.  I've got it far enough along so that it loops at the disc routine at 0x231 waiting for an LD-V1000 strobe.  While I had it looping, I was checking out some performance metrics to see how fast my new Z80 emu was running.  To my shock, after about 1 minute, program execution moved away from that endless loop.  After a few hours of tracking down why, I discovered this software watchdog that I never knew existed.

I occasionally get questions about whether Dexter is 'the problem' when a Dragon's Lair or Space Ace doesn't work.  Here's a video to shed some light on where boot problems may be.

When I was taking my Asus G75VW laptop apart (an older laptop but still quite useful!), I noticed one of the fan power connectors was falling apart.  It broke as I removed it. 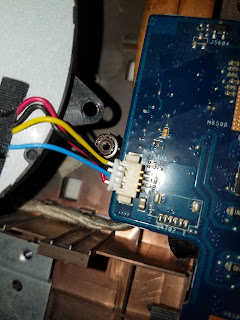 After much searching, I found an "exact" replacement:

Hopefully this helps someone else in the future, as this was quite difficult for me to locate.

Posted by Matt Ownby at 2:06 PM No comments:

Email ThisBlogThis!Share to TwitterShare to FacebookShare to Pinterest
Labels: docker

Esh's Aurunmilla uses two PROMs to generate video sync.  Unfortunately, these two PROMs are obsolete and the ones I was able to find tend to overheat so are unsuitable for cabinet use.  Fortunately, Xilinx makes a pretty nifty Complex Programmable Logic Device (CPLD) that should be able to replace both PROMs nicely!

Posted by Matt Ownby at 4:12 PM No comments:

Email ThisBlogThis!Share to TwitterShare to FacebookShare to Pinterest
Labels: esh

I first got the idea to clone the Esh's Aurunmilla PCB aboout five years ago.  I've always liked this game because it is so cheesy that it's endearing.  The fact that hardly any PCBs are known to exist and that no one seems to have the schematics makes preserving this game a more interesting challenge.  I would never be able to own the original game PCB.  But could I make a 1:1 clone of it?